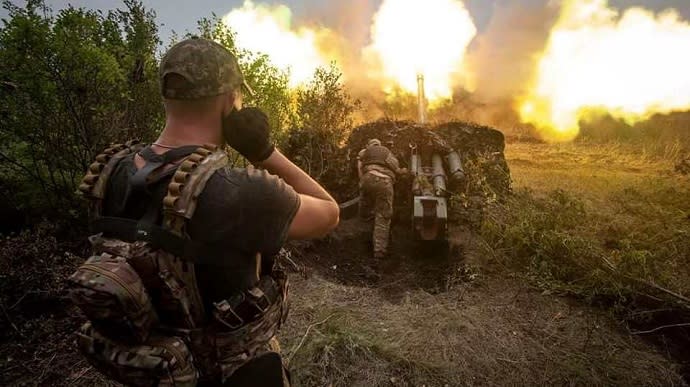 The Armed Forces of Ukraine have forced Russian troops to retreat, with losses, on the Kharkiv, Avdiivka, and Bakhmut fronts and have neutralised a Russian reconnaissance group on the Sloviansk front.

Source: General Staff of the ArmedForces of Ukraine on Facebook, information as of 06:00 on 3 August

Details: The General Staff of the Belarusian Armed Forces held communications training on the Volyn and Polissia fronts. Russia continues to use the territory of the Republic of Belarus to transfer its sabotage and reconnaissance groups to the territory of Ukraine.

On the Sivershchyna front, Russian forces fired on the positions of Ukrainian troops in the area using tubed artillery, conducted aerial reconnaissance in the areas near the Ukrainian-Russian border in Chernihiv and Sumy oblasts, and deployed electronic warfare systems.

Russian forces are conducting hostilities in order to maintain their positions and to prevent the Ukrainian Defence Forces on the Slobozhanshchyna front.

The Russians attempted to advance on the Kochubeivka – Dementiivka axis, but were repelled by the Ukrainian Armed Forces and retreated.

Meanwhile, a Russian reconnaissance group attempted to conduct reconnaissance to the south of Mazanivka, but was uncovered and neutralised by the Ukrainian Armed Forces.

Russia’s main efforts in Donetsk Oblast are focused on the Bakhmut front.

On the Siversk front, Russian troops used tubed and rocket artillery, as well as tank guns, to fire in the vicinity of Siversk, Serebrianka, and Hryhorivka and conducted aerial reconnaissance using UAVs near Nykyforivka and Tetianivka.

On the Bakhmut front, the Russians attempted to push the Ukrainian units back by shelling their positions in the vicinity of Kodema, Semyhiria, Travneve, Vyimka, Berestove, Bakhmutske, and Opytne using artillery. In addition, Russian aircraft conducted airstrikes near Semyhiria and Bilohorivka.

Russian forces conducted assault operations on the outskirts to the west of Berestove, but were unsuccessful and retreated. The Russians similarly had to retreat on the Volodymyrivka – Yakovlivka and Semyhiria – Kodema axes.

Fighting is currently underway on the Volodymyrivka – Soledar and Pokrovske – Bakhmut axes.

On the Avdiivka front, Russian occupying forces shelled the area around the city of Avdiivka. Their attempts to improve their tactical positions were thwarted by the Ukrainian Armed Forces and the Russians retreated with losses.

Due to the low level of staffing of the Russian reserve tank regiment, its military equipment – which was transferred to the Zaporizhzhia front in late May – has been handed over to replenish the tank battalions of the 58th Combined Arms Army of the Southern Military District of the Russian Federation.

Russia has deployed electronic warfare systems to prevent Ukrainian forces from conducting reconnaissance in the area.

Russian occupying forces conducted aerial reconnaissance in order to scout the positions of the Ukrainian troops in the area, adjust fire, and ensure appropriate masking of Russian units.

The Russians are continuing to take measures to ensure the security of bridge crossings over the river Dnipro.

Two high-precision missile carriers armed with Kalibr cruise missiles are on standby in the waters of the Black Sea.

Russian aircraft are conducting regular combat missions in order to support their ground forces, focusing in particular on targets on the Donetsk front. Aircraft have been less active due to the recent bout of bad weather.

Ukrainian rocket artillery units are continuing to fire on Russian strong points, concentrations of Russian troops and their logistical and supply bases.