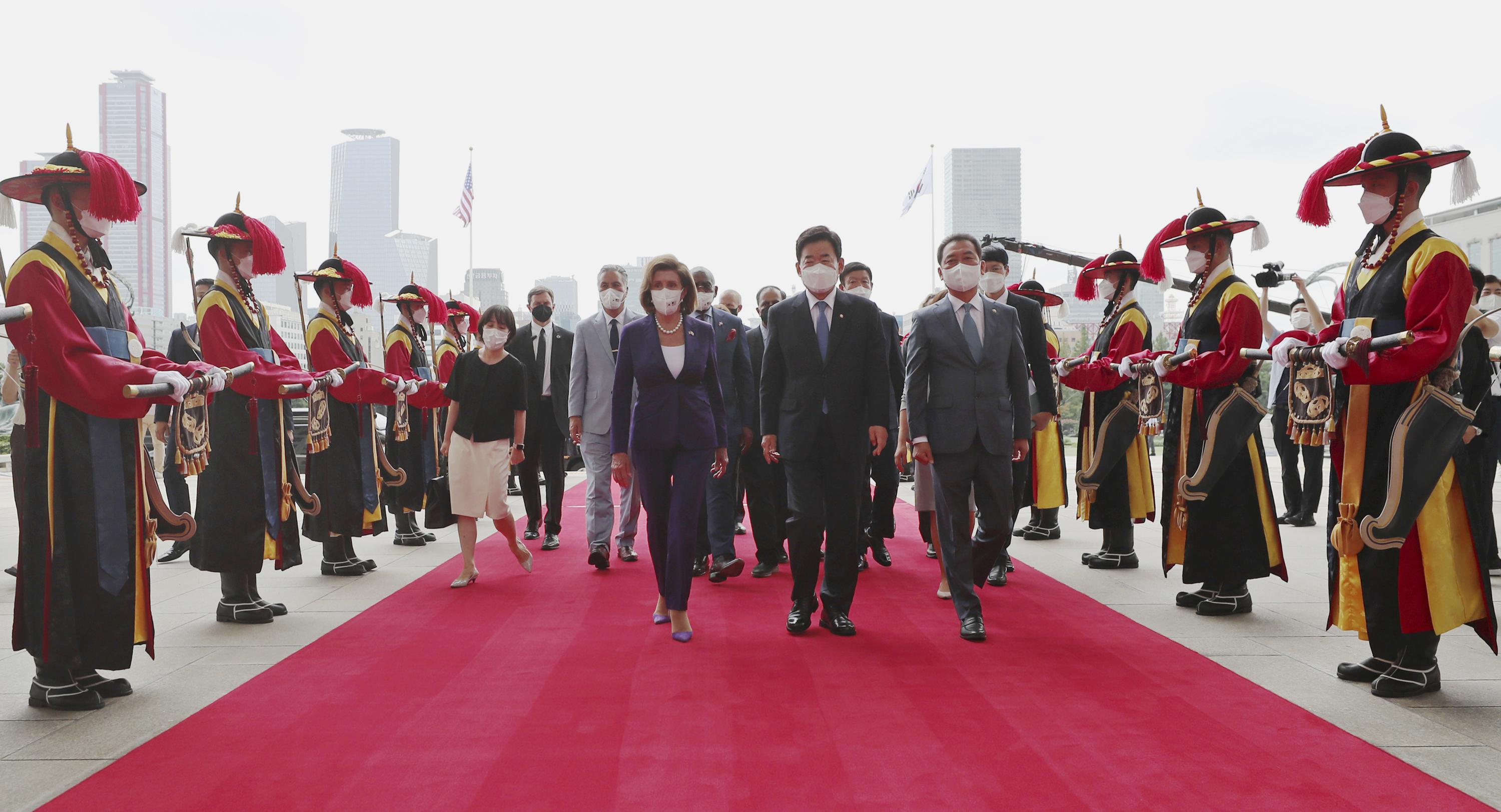 Pelosi, the first House speaker to visit Taiwan in 25 years, said Wednesday in Taipei that the American commitment to democracy in the self-governing island and elsewhere “remains ironclad.” In response, China on Thursday began military exercises, including missile strike training, in six zones surrounding Taiwan, in what could be the biggest of their kind since the mid-1990s.

After visiting Taiwan, Pelosi and other members of her congressional delegation flew to South Korea — a key U.S. ally where about 28,500 American troops are deployed — on Wednesday evening, as part of an Asian tour that included earlier stops in Singapore and Malaysia.

She met South Korean National Assembly Speaker Kim Jin Pyo and other senior members of Parliament on Thursday. After that hour-long meeting, Pelosi spoke about the bilateral alliance, forged in blood during the 1950-53 Korean War, and legislative efforts to boost ties, but didn’t directly mention her Taiwan visit or the Chinese protests.

“We also come to say to you that a friendship, a relationship that began from urgency and security, many years ago, has become the warmest of friendships,” Pelosi said in a joint news conference with Kim. “We want to advance security, economy and governance in the inter-parliamentary way.”

Neither Pelosi nor Kim took questions from journalists.

Kim said he and Pelosi shared concerns about North Korea’s increasing nuclear threat. He said the two agreed to support their governments’ push for denuclearization and peace on the Korean Peninsula based on both strong deterrence against North Korea and diplomacy.

Pelosi and her delegation later spoke by phone with South Korean President Yoon Suk Yeol on the alliance, foreign policy and other issues. Yoon is on vacation this week, but critics accuse him of intentionally shunning a face-to-face meeting with Pelosi in consideration of ties with China, South Korea’s biggest trading partner. Yoon’s office said it had reviewed national interests.

During the phone conversation, Pelosi and other members of her congressional delegation didn’t bring up the Taiwan issue, and Yoon also didn’t raise the matter, Yoon’s office said.

Later Thursday, Pelosi was to visit a border area with North Korea that is jointly controlled by the American-led U.N. Command and North Korea, South Korean officials said. If that visit occurs, Pelosi would be the highest-level American to go to the Joint Security Area since then-President Donald Trump visited in 2019 for a meeting with North Korean leader Kim Jong Un.

Sitting inside the 4-kilometer (2.5-mile) -wide Demilitarized Zone, a buffer created at the end of the Korean War, the JSA is the site of past bloodshed and a venue for numerous talks. U.S. presidents and other top officials have often traveled to the JSA and other border areas to reaffirm their security commitment to South Korea.

Any statement critical of North Korea by Pelosi is certain to draw a furious response from it. On Wednesday, the North’s Foreign Ministry slammed the United States over her Taiwan trip, saying “the current situation clearly shows that the impudent interference of the U.S. in internal affairs of other countries … (is) the root cause of harassed peace and security in the region.”

The Chinese military exercises launched Thursday involve its navy, air force and other departments and are to last until Sunday. They include missile strikes on targets in the seas north and south of the island in an echo of the last major Chinese military drills aimed at intimidating Taiwan’s leaders and voters in 1995 and 1996.

China’s official Xinhua News Agency said the exercises are joint operations focused on “blockade, sea target assault, strike on ground targets, and airspace control.” Taiwan has put its military on alert and staged civil defense drills, while the U.S. has numerous naval assets in the area.

China already has flown fighter jets and other war planes toward Taiwan, and blocked imports of citrus and fish from Taiwan.

Taiwan’s Defense Ministry called the Chinese drills “unreasonable actions in an attempt to change the status quo, destroy the peace and stability of the region.”

Pelosi’s Taiwan visit has angered China because it views the island as a breakaway province to be annexed by force if necessary. China views visits to Taiwan by foreign officials as recognizing its sovereignty.

“Today the world faces a choice between democracy and autocracy,” Pelosi said in a short speech during a meeting with Taiwanese President Tsai Ing-wen on Wednesday. “America’s determination to preserve democracy, here in Taiwan and around the world, remains ironclad.”

The Biden administration and Pelosi have said the United States remains committed to the “one-China policy,” which recognizes Beijing as the government of China but allows informal relations and defense ties with Taipei. The administration discouraged but did not prevent Pelosi from visiting.

National Security Council spokesperson John Kirby sought to tamp down fears. He told ABC’s “Good Morning America” on Wednesday that U.S. officials “don’t believe we’re at the brink now, and there’s certainly no reason for anybody to be talking about being at the brink going forward.”

Addressing Beijing’s threats, Pelosi said in Taiwan she hopes it’s clear that while China has prevented Taiwan from attending certain international meetings, “that they understand they will not stand in the way of people coming to Taiwan as a show of friendship and of support.”

Pelosi noted that congressional support for Taiwan is bipartisan, and she praised the island’s democracy. She stopped short of saying that the U.S would defend Taiwan militarily and emphasized that Congress is “committed to the security of Taiwan, in order to have Taiwan be able to most effectively defend themselves.”

Tsai pushed back firmly against Beijing’s military exercises, parts of which Taiwan says will enter its waters.

“Facing deliberately heightened military threats, Taiwan will not back down,” Tsai said at her meeting with Pelosi. “We will firmly uphold our nation’s sovereignty and continue to hold the line of defense for democracy.”

On Thursday, the 10-nation Association of Southeast Asian Nations called for calm in the Taiwan Strait, which separates mainland China and Taiwan, and urged the avoidance of any “provocative action.” ASEAN foreign ministers, who are meeting in Phnom Penh, Cambodia, for a regional forum, said they were concerned the situation could “destabilize the region and eventually could lead to miscalculation, serious confrontation, open conflicts and unpredictable consequences among major powers.”

Pelosi’s focus has always been the same, she said, going back to her 1991 visit to Beijing’s Tiananmen Square, when she and other lawmakers unfurled a small banner supporting democracy two years after a bloody military crackdown on protesters at the square. That visit was also about human rights and what she called dangerous technology transfers to “rogue countries.”

Pelosi’s trip heightened U.S.-China tensions more than recent visits by other members of Congress because of her position as leader of the House of Representatives. The last House speaker to visit Taiwan was Newt Gingrich in 1997.

China and Taiwan, which split in 1949 after a civil war, have no official relations but multibillion-dollar business ties.