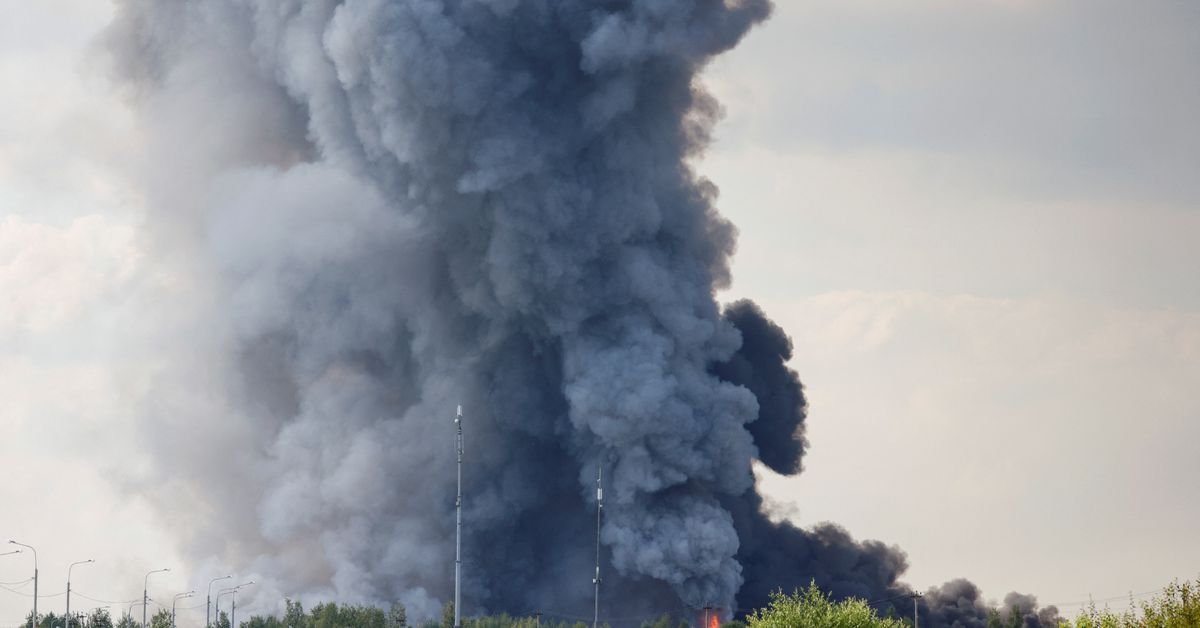 MOSCOW, Aug 3 (Reuters) – At least one person was killed and 13 injured when a huge fire broke out at a warehouse northwest of Moscow owned by Russian e-commerce firm Ozon (OZON.O) on Wednesday, RIA quoted a source in the emergency services as saying.

Dozens of firefighters battled to douse the fire using helicopters and 100 tonnes of water as a large plume of dark smoke billowed from the roof of the bright blue warehouse.

RIA reported that the emergency services were considering arson as the likeliest cause of the fire at the warehouse near the settlement of Istra.

Separately, emergencies ministry official Alexander Chupryan said no one had been killed and 11 others had sought medical assistance, Interfax news agency quoted him as telling state television.

Reuters was not immediately able to corroborate RIA’s report or Chupryan’s comments.

Ozon said all employees had been safely evacuated from the warehouse and none had been injured. It said the fire broke out in a standalone block at its fulfilment centre, which holds and processes thousands of goods slated for delivery.

The emergencies ministry said the fire had spread to an area of 35,000 square metres. A fire-pumping station, an Mi-8 helicopter, two Ka-32 helicopters, 150 firefighters and 40 other pieces of equipment were deployed to the scene, it said.

Ozon said it had removed the goods in the warehouse from its online marketplace.

“Customers will be refunded for lost orders,” Ozon said in a statement. “Sellers will receive compensation for damaged or lost goods.”

Nasdaq-listed Ozon is one of Russia’s largest e-commerce players. It was not immediately clear what value or number of goods were affected.

Ozon’s Moscow-listed depositary receipts were down 0.62% at 1549 GMT after earlier slipping to a near two-week low.

Reporting by Reuters; Editing by Alexander Smith and Leslie Adler