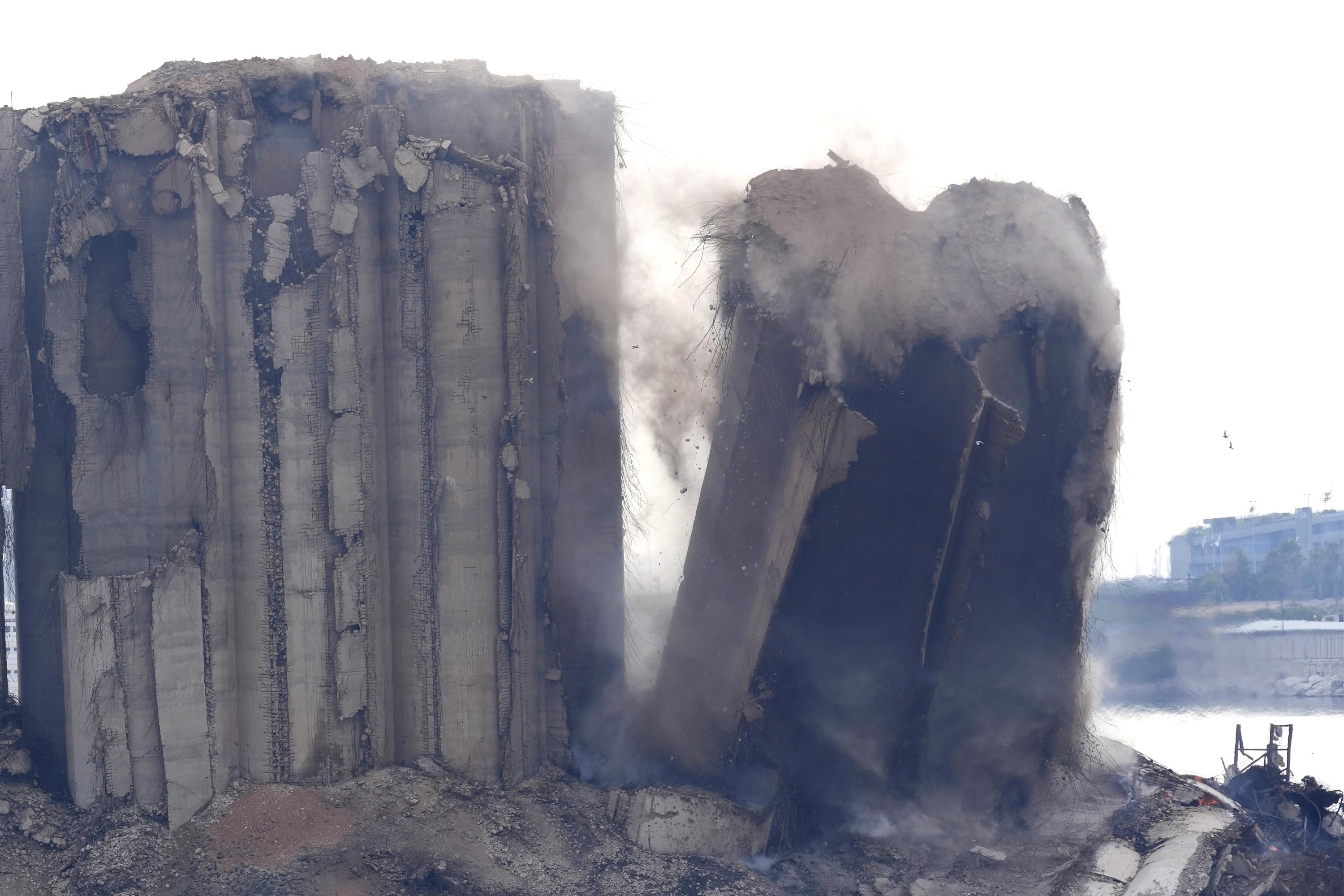 BEIRUT (AP) — A large block of Beirut’s giant port grain silos, shredded by a massive explosion two years ago, collapsed on Thursday as hundreds marched in the Lebanese capital to mark the second anniversary of the blast that killed scores.

The northern block of the silos, consisting of four towers, had been slowly tilting for days before it collapsed, causing a huge cloud of dust. The silos had shielded Beirut’s western neighborhoods in the Aug. 4, 2020 explosion that killed nearly 220 people, injured over 6,000 and caused damage worth billions of dollars.

Thursday’s collapse of roughly a fourth of the structure occurred an hour before hundreds of people were to gather outside the facility to mark the 2nd anniversary of the disaster. Authorities had evacuated parts of the port earlier this week — after an initial section of the silos collapsed on Sunday — as a precautionary measure and there was no indication that anyone was hurt.

The 50 year-old, 48 meter (157 feet) tall silos had withstood the force of the 2020 explosion that destroyed much of the port. Many in Lebanon, including families of the victims, have been demanding that the silos be kept for future generations as a testament to a blast they say was caused by widespread corruption and mismanagement in the small Mediterranean nation.

Sunday’s initial collapse was triggered by a weekslong fire, caused by remnants of grains left over from the 2020 explosion that started fermenting and ignited in the summer heat last month. Firefighters and Lebanese Army soldiers were unable to put it out and it smoldered, a nasty smell spreading around.

The environment and health ministries in late July issued instructions to residents living near the port to stay indoors in well-ventilated spaces. Experts warned of more collapses in the days to come and said the entire structure of the silos was in danger of coming down.

Following Thursday’s collapse, fire engines and an army helicopter sprayed the silos with water in an attempt to put out the fire.

Emmanuel Durand, a French civil engineer who volunteered for the government-commissioned team of experts, said eight silos are still left in the northern block. He added that this part has a tilt of 3.3 degrees and is picking up the same trend as before — almost 0.5 degrees “per day, which is huge.”

“The south block is still not moving,” said Durand who monitors the silos from thousands of miles away using data produced by sensors he installed over a year ago, and updating a team of Lebanese officials on the developments in a WhatsApp group.

The anniversary came amid calls for an international investigation into the blast, one of the most destructive single incidents in Lebanon’s troubled modern history. The domestic investigation has been stalled since December following legal challenges by charged and accused officials against the judge leading the investigation.

Hundreds of people, including families of the victims, marched from three locations in Beirut toward the main road outside the port Thursday. Some carried white coffins with names of some of the victims, others carried mock gallows, demanding punishment for those responsible.

“The pain is still the same,” said a man who had lost his brother.

Two years on, none of the top politicians have apologized to the Lebanese. The government called for a day of mourning, leading many businesses to close.

Tarek Bitar, the judge leading the Lebanese investigation, had charged four former senior government officials with intentional killing and negligence that led to the deaths of scores of people. He also charged several top security officials in the case.

But none of them have been detained and two of those charged were re-elected to parliament in May.

“There is no justice under the rule of militia and mafia,” read one banner carried during the march — an apparent reference to the Lebanese militant Hezbollah group, which has been calling for the removal of Bitar, describing him as biased.

Many have blamed the Lebanese government’s longtime corruption and mismanagement, saying it paved way for the tragedy, when hundreds of tons of highly explosive ammonium nitrate, a material used in fertilizers, detonated at the port.

“The state has no right to abstain from the Lebanese investigation and also prevent an international investigation,” said Cardinal Bechara Rai, the head of the Maronite Catholic church, Lebanon’s largest, during a special prayers Thursday for the victims.

Some of those marching made a brief stop outside the French Embassy to urge France, Lebanon’s former colonial power, to call on the U.N. Human Rights Council to send a fact-finding mission to investigate the blast.

They later gathered outside the port where they called for justice and vowed never to give up on the case, before dispersing peacefully.

Official correspondence between political, security and judicial officials has revealed that many were aware about the hazardous substances stored in the port, without taking meaningful action to remove it.

After the blast, port customs and legal documents revealed that the ammonium nitrate had been shipped to Lebanon in 2013 on a worn-out Russian ship and stored improperly at a port warehouse ever since.