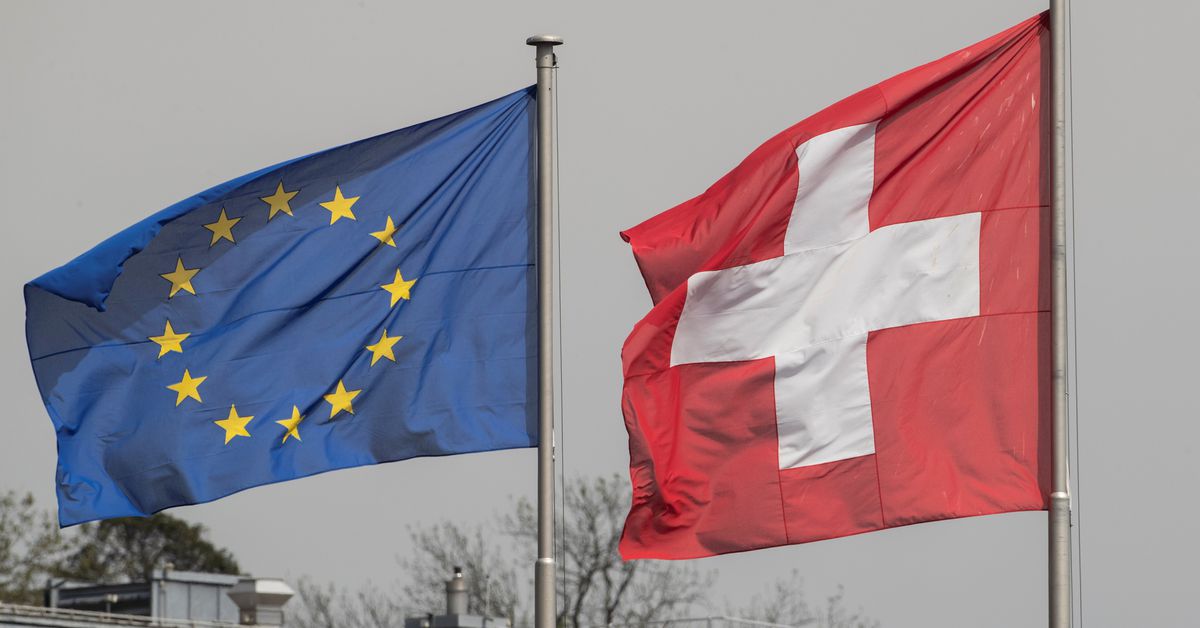 Switzerland’s national flag flies beside the one of the European Union in Zurich, Switzerland May 3, 2022. REUTERS/Arnd Wiegmann

BERLIN/ZURICH, Aug 3 (Reuters) – The Swiss government imposed further sanctions against Russia over the war in Ukraine on Wednesday, in line with the European Union’s latest measures on gold and gold products, the cabinet said.

The government said that it had made two new exceptions with respect to transactions related to agricultural products and oil supplies to third countries, which the EU has as well, in order to avoid any disruptions in payment channels.

“The new measures primarily concern a ban on buying, importing or transporting gold and gold products from Russia. Services in connection with these goods are also prohibited,” a government statement said.

It added that none of the measures against Russia were directed against the trade in agricultural or food products between third countries and Russia.

“To avoid disruption to payment channels, the Federal Council (cabinet) has made two new exceptions with respect to transactions related to agricultural products and oil supplies to third countries, as has the EU,” it said.

Purchases of Russian seaborne crude oil by EU companies and its export to third countries are allowed, but under tweaks to EU sanctions on Russia that came into force last month, payments related to such shipments would not be banned. read more

The government said the exceptions were not a weakening of Switzerland’s position.

“The new measures are not tantamount to softening sanctions,” a spokesperson said.

“Rather, they are fully aligned with those that the EU adopted in view of the Union’s determined stance to combat food and energy insecurity around the world.”

The Swiss government noted that the largest Russian bank, Sberbank, has also had its assets frozen and is banned from providing funds, economic resources or technical services.

“New derogations are being introduced to ensure the orderly wind-down of transactions and the sale of Sberbank subsidiaries,” it said. read more