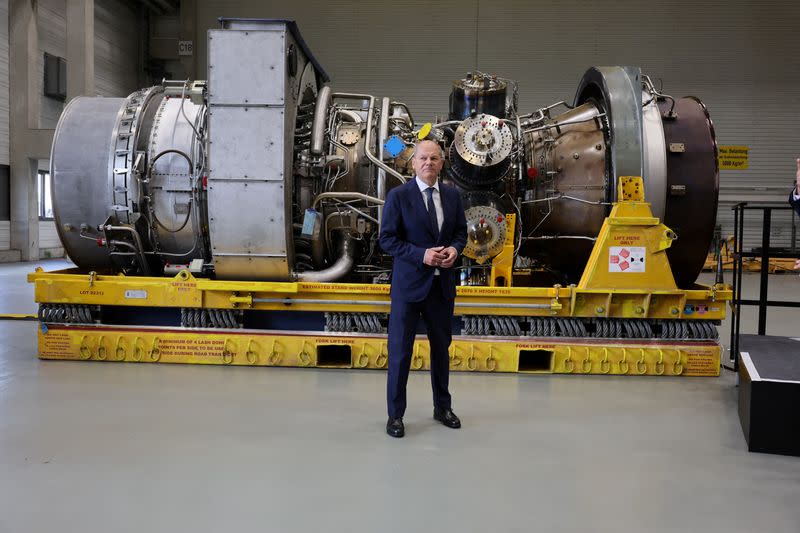 MUELHEIM AN DER RUHR, Germany (Reuters) -German Chancellor Olaf Scholz on Wednesday said Russia had no reason to hold up the return of a gas turbine for the Nord Stream 1 pipeline that had been serviced in Canada but has since been stranded in Germany in an escalating energy standoff.

Standing next to the turbine on a factory visit to Siemens Energy in Muelheim an der Ruhr, Scholz said it was fully operational and could be shipped back to Russia at any time – provided Moscow was willing to take it back.

He also dangled the prospect of Europe receiving gas through the Nord Stream 2 pipeline, a Moscow-led project that was blocked by the West as Russia sent troops into Ukraine.

For Canadian Foreign Minister Melanie Joly, whose government has faced criticism for returning the turbine in violation of its own sanctions, the present impasse was worth it as an illustration of the Kremlin’s purpose.

“We called his bluff,” she said at a meeting with her German counterpart Annalena Baerbock in Montreal. “It is now clear that Putin is weaponising energy flows through Europe.”

A senior manager at Kremlin-controlled Gazprom has said the delivery of the turbine after servicing was not in line with the contract and that it had been sent to Germany without Russia’s consent.

After being forced to bail out the utility Uniper when it became an early casualty of the gas crisis, Scholz’s government will have to amend newly introduced energy reforms, sources told Reuters on Wednesday. [L8N2ZF314]

Schroeder said Russia was ready for a negotiated settlement to end the war in an interview published on Wednesday, after travelling to Russia to meet Putin last week.

(Reporting by Christoph Steitz in Muehlheim, Allison Lampert in Montreal and Ismail Shakil in Ottawa, writing by Kirsti Knolle and Matthias WilliamsEditing by Madeline Chambers, Elaine Hardcastle and David Evans)