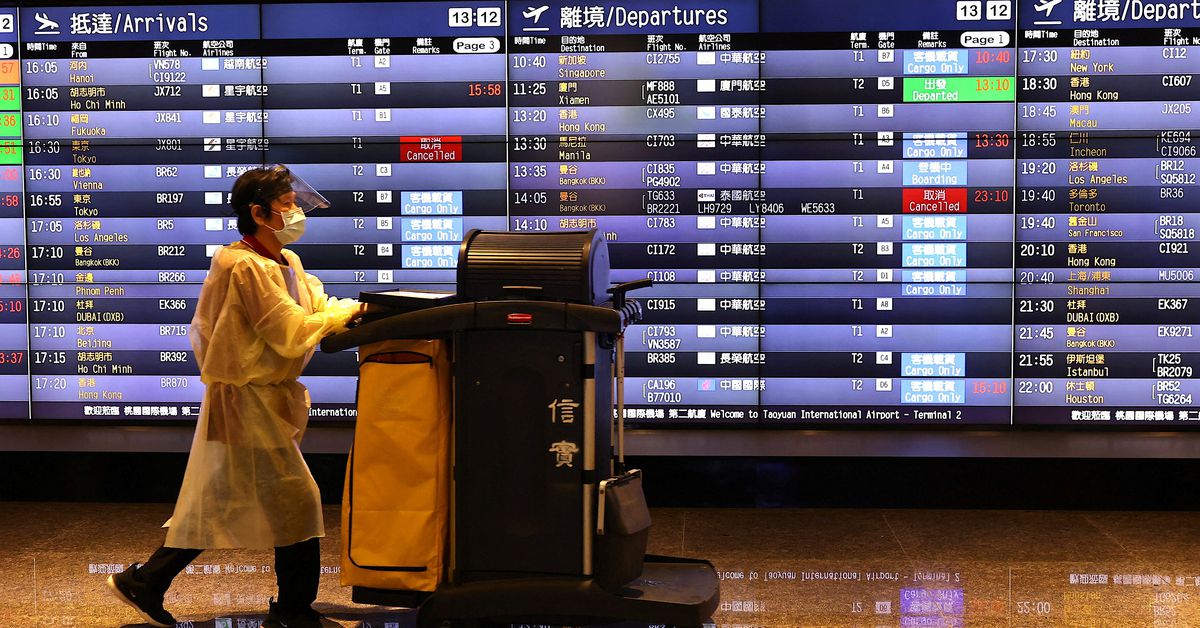 SEOUL, Aug 5 (Reuters) – Airlines have cancelled flights to Taipei and rerouted others to avoid airspace nearby that has been closed to civilian traffic during Chinese military exercises sparked by U.S. House of Representatives Speaker Nancy Pelosi’s visit to Taiwan.

China deployed scores of planes and fired live missiles near Taiwan on Thursday in its biggest-ever drills in the Taiwan Strait, set to run until noon local time (0400 GMT) on Sunday in six zones encircling much of the island. read more

The airspace involved is comparatively small, but the disruption from the largest military exercises by China in the area since it fired missiles off the coast in 1996 is hampering travel between Southeast Asia and Northeast Asia.

This situation is unusual in that China’s exercises bisect Taiwan’s claimed 12 nautical miles (22 kilometres) of territorial waters – something Taiwanese officials say challenges the international order and amount to a blockade of its sea and airspace. read more

Korean Air Lines Co Ltd (003490.KS) and Singapore Airlines Ltd (SIAL.SI) said they had cancelled flights to and from Taipei on Friday due to the exercises, with the Korean carrier also cancelling its Saturday flights and delaying Sunday flights.

Japan’s ANA Holdings Inc (9202.T) and Japan Airlines Co Ltd (9201.T) are still operating flights to Taipei as normal, spokespeople for the airlines said, but are avoiding the affected airspace on those flights, as well as on routes to Hong Kong and Southeast Asia.

Hong Kong’s Cathay Pacific Airways Ltd (0293.HK) and Philippines Airlines said their flights were avoiding designated airspace zones around Taiwan, in a move that could lead to more flying time for some flights, while Vietnam’s aviation regulator warned its airlines to avoid the area. read more

Flight tracking service FlightRadar24 showed Taiwanese carriers China Airlines Ltd (2610.TW) and EVA Airways Corp (2618.TW) were still flying to and from the island as of Friday morning, as were cargo carriers FedEx Corp (FDX.N) and United Parcel Service Inc (UPS.N), though avoiding the areas affected by the military drills.

Taiwan, along with mainland China and Hong Kong, is one of the few places in the world that still requires quarantine for arrivals because of COVID-19, triggering reduced demand for travel to the island that means there are far fewer flights than before the pandemic.

OPSGROUP, an aviation industry cooperative that shares information on flight risks, said the exercises would affect major routes between Southeast Asia and Northeast Asia, leading to re-routings that could take longer and burn extra fuel.

The airspace involved, however, is minor in its impact on the global aviation industry compared to the decision by most airlines to bypass overflight of other places like Russia, Ukraine, Afghanistan, North Korea, Iraq and Syria.

The avoidance of Russian airspace, for example, has led to a near four-hour increase in flight times between Finland and Japan. read more