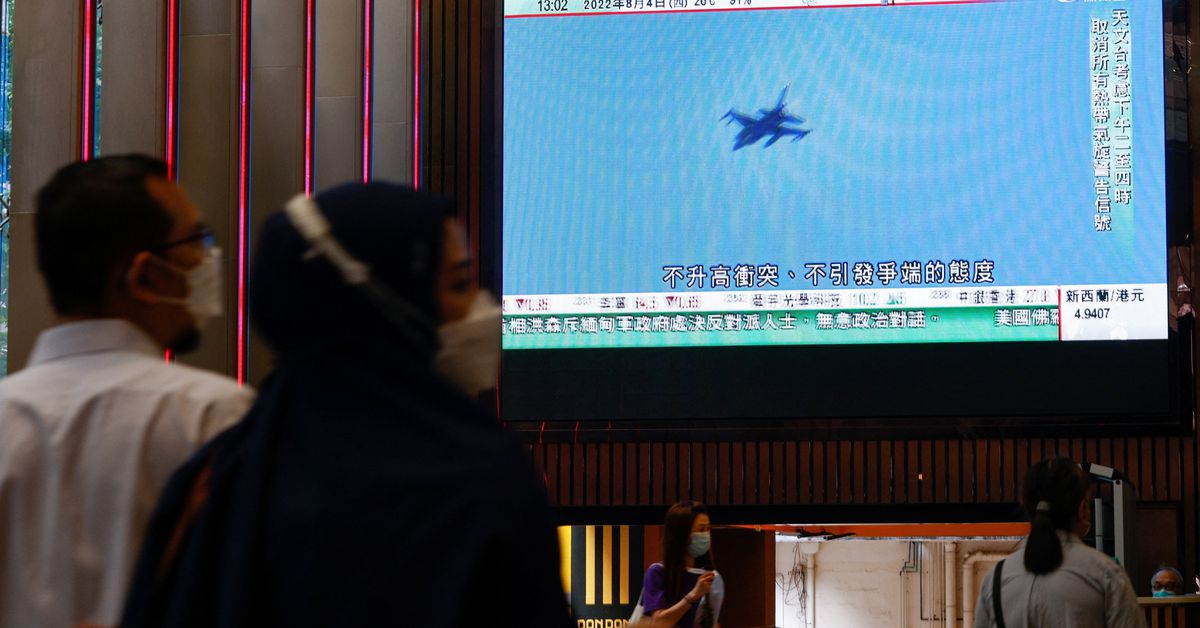 TAIPEI, Aug 5 (Reuters) – Taiwan condemned its “evil neighbour” on Friday after China fired multiple missiles into its surrounding waters, as many as four of which flew over the island’s capital Taipei in an unprecedented escalation during live-fire exercises.

China launched its largest ever military drills in the seas and skies around Taiwan on Thursday, a day after U.S. House of Representatives Speaker Nancy Pelosi enraged Beijing by making a solidarity trip to the self-ruled island that China claims as its own.

Japan’s defence ministry, which is tracking the exercises, first reported that as many as four of the missiles flew over Taiwan’s capital. Japan also said that five of nine missiles fired towards its territory landed in its exclusive economic zone (EEZ), also a first, prompting Tokyo to launch a diplomatic protest.

Later, Taiwan’s defence ministry said the missiles were high in the atmosphere and constituted no threat. It did not give details of their flight paths, citing intelligence concerns.

China is arbitrarily destroying the world’s most frequently used waterway with military exercises, Taiwan Premier Su Tseng-chang told reporters in Taipei on Friday, referring to it as the “evil neighbour,” when asked about China’s missile launches. read more

China’s actions are being condemned by neighbouring countries and the world, Su added.

“That’s unprecedented,” Bonnie Glaser, a Washington-based Asia security specialist at the German Marshall Fund of the United States, said of statements that four ballistic missiles had been fired over Taiwan.

“In my view, the larger threat is that China is doing a rehearsal for a blockade, demonstrating it can block Taiwan’s ports and airports, and prevent shipping,” she said.

The drills are scheduled to continue until noon on Sunday.

China has said its relations with Taiwan are an internal matter.

“The U.S.-Taiwan collusion and provocation will only push Taiwan towards the abyss of disaster, bringing catastrophe to Taiwan compatriots,” said a Chinese defence ministry spokesperson.

Responding to the Chinese drills, President Tsai Ing-wen said Taiwan would not provoke conflicts but would firmly defend its sovereignty and national security.

Taiwan has been self-ruled since 1949, when Mao Zedong’s communists took power in Beijing after defeating Chiang Kai-shek’s Kuomintang (KMT) nationalists in a civil war, prompting the KMT-led government to retreat to the island.

Beijing says it reserves the right to bring Taiwan under China’s control, by force if necessary.

‘NOT ABOUT ME’ SAYS PELOSI

The White House condemned China’s move as “irresponsible” and said it expected Beijing would continue to react in the coming days.

Pelosi, who is currently in Japan, told reporters that China could not isolate Taiwan by preventing Western officials from travelling there.

“This visit isn’t about me, it’s about Taiwan,” she said.

During a news conference in Tokyo, Pelosi addressed the diplomatic storm caused by the congressional visit to Asia, and most specifically Taiwan.

“We have said from the start that our representation here is not about changing the status quo in Taiwan or the region,” she told a news conference after meeting with Japanese Prime Minister Fumio Kishida.

The congressional delegation led by Pelosi visited Singapore, Malaysia, Taiwan and South Korea earlier this week before arriving in Japan for the last leg of the tour.

Pelosi met Kishida at his official residence, where the Japanese prime minister said the two allies would work together to maintain peace and stability in the Taiwan Strait, a key shipping route. read more

Japan, whose southernmost islands are closer to Taiwan than Tokyo, has warned that Chinese intimidation of Taiwan is an escalating national security threat.

“I have informed speaker Pelosi that the fact China’s ballistic missiles had landed near Japanese water including EEZ threaten our national safety and security and that Japan had strongly condemned such actions,” Kishida said.