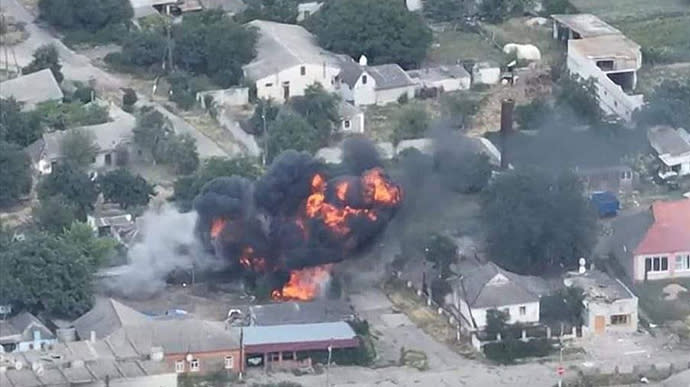 The Strategic Communications Department of the Armed Forces of Ukraine says that Russia, currently building up its forces in Kherson Oblast, will not succeed in offensive actions.

Russian troops have placed their ammunition depots either on the left side of the Dnipro or on the right side – squeezed tightly into the river bank so that they are not reached by Ukrainian weapons.

Stratom has noted that the positions of the Russians are 30-40 km away, which places their warehouses within reach of Ukrainian M-142 HIMARS.

Also, the Armed Forces of Ukraine stressed the importance of the Russian Federation not having a single large depot that would provide advanced units with ammunition and fuel at a distance of less than 10-15 km. Most Russian warehouses are at a distance of roughly 30 km from their advanced positions.

StratCom hinted that they are aware of the locations of Russian warehouses in the north and northeast of Kherson Oblast.

Therefore, the Armed Forces of Ukraine summed up that the Russian units forming a full-fledged strike group on the right bank of Kherson Oblast will be fully provided with personnel, but will have problems with equipment and related consumables.

Quote from StratCom AFU: “Even with the existing number of warehouses that are now located on the right bank and have not yet smelled ‘cotton’ [Russian propaganda, in initially refusing to use the word ‘’ (explosion), used ‘’ (a clap) instead. ‘’ also means ‘cotton’, which has since become a meme – ed.], we can say that their number is insufficient to provide for such a large group of troops. After the claps [strikes] start to sound on them, there will be only hoping for the resources on the left bank.”

Russians have most often used the Antonivka Road Bridge for the transfer of their troops and equipment, since it is located closest to Kherson. But after accurate Ukrainian strikes on the bridge, it became unsuitable for crossings.

Now a considerable detour must be made through Nova Kakhovka for Russia to transfer its forces to the right bank of the Dnipro and replenish its warehouses.

At this time, the Armed Forces of Ukraine continue to destroy Russian warehouses and liberate settlements in Kherson Oblast.